Use This Form To Submit Contest Questions In September 2016, a new initiative was birthed: the Kairos Integrity Essay Contest. The purpose of the Kairos essay contest is to support the mission and to promote integrity in the lives of our youth. The contest has two components – written and oral. The top three essay writers are invited to the planned celebratory event to give an oratory of their essay based on the topic.

2016 - The first Kairos Essay and Awards was hosted at an intimate teahouse (30 capacity), elegant dinner and “High Tea” setting on October 22, 2016 at the Mulberry House in Westfield, NJ. "Being Transformed," an ongoing process, was the theme that year based on the biblical reference (Romans 12:2). The co-winners, LaBrea Tutt and Faith Garrett, each received an Award Certificate and a $250 cash award. Faith was taking her SAT exam on the date of Awards ceremony. She presented her essay virtually via YouTube.

2017/18 - The second Kairos Essay and Awards Banquet was scheduled for October 21, 2017 but extended to the following year to allow for other students to compete. The theme was “Push for Purpose” Now, that the essays were evaluated, we selected the top three winners and invited them to participate in the banquet on March 31, 2018.

The celebration was grand – a beautifully decorated hall, catered food, a Christian DJ, and a dynamic speaker and beautiful souvenir programs. The event was “Chic” Black-Tie Affair, with lots of young adults from the Kairos Youth Speak Out group we had started launched the fourth quarter 2017. This time each of the winners received a student laptop in addition to the prorated cash reward. Contestant Trinity Hart placed first in the Essay Contest. In addition to the $400 award, she received a laptop and Spa Basket, provided by a local entrepreneur.

The 2019 Essay Scholarship Contest kicked off in January. The theme was “Greatness Is in Me.” What Is It? Contestants were challenged Contestants submitted essay up to February 21, 2019. The Kairos Essay and Awards event was held April 20, 2019.  Based on the Contest Rules, one grand-prize winner was selected, Camille Adams. The Awards ceremony was held at my local church in Newark, NJ. Camille received a lovely designer handbag and the cash award of $500.00.

2021 KAIROS WINNERS HAVE BEEN SELECTED 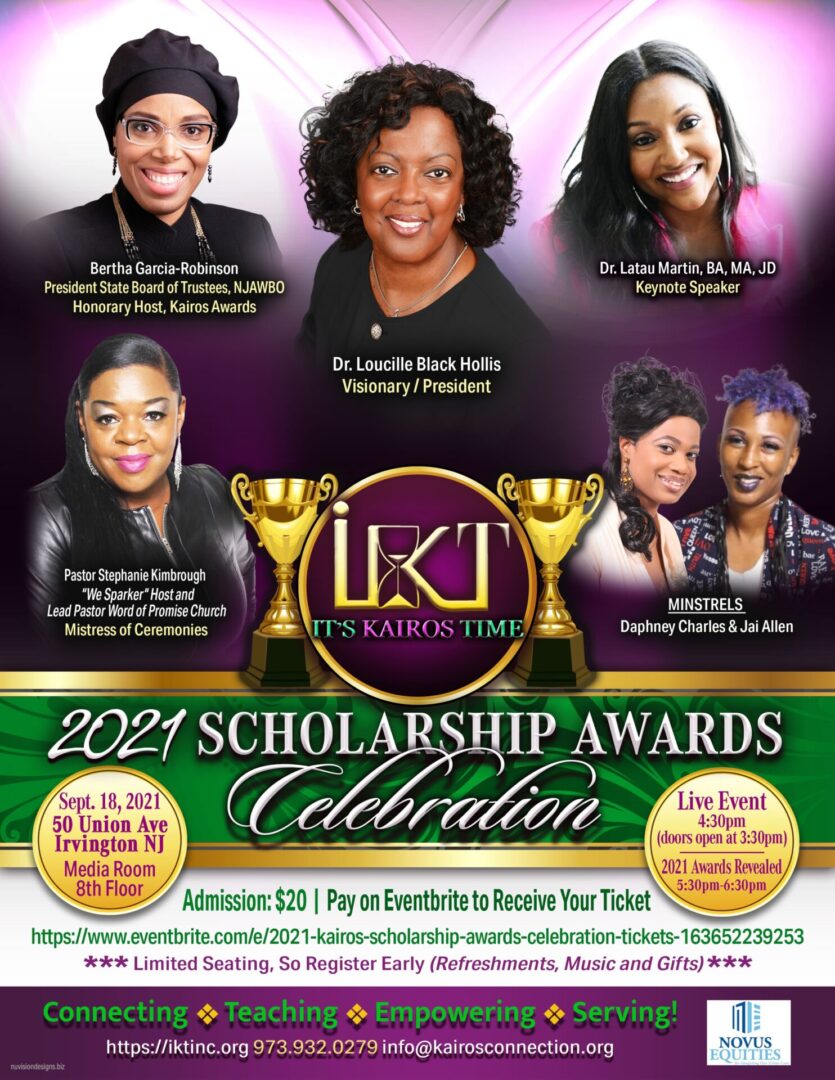 Use this link to purchase your ticket: https://www.eventbrite.com/e/2021-kairos-scholarship-awards-celebration-tickets-163652239253